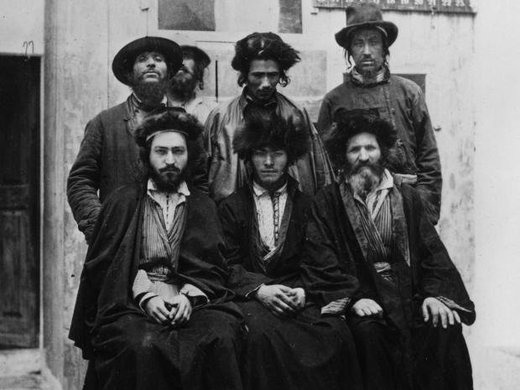 © Getty Images
A group of Ashkenazic Jews in Jerusalem, circa 1885
New research suggests that the majority of the world's modern Jewish population is descended mainly from people from ancient Turkey, rather than predominantly from elsewhere in the Middle East.

The new research suggests that most of the Jewish population of northern and eastern Europe - normally known as Ashkenazic Jews - are the descendants of Greeks, Iranians and others who colonized what is now northern Turkey more than 2000 years ago and were then converted to Judaism, probably in the first few centuries AD by Jews from Persia. At that stage, the Persian Empire was home to the world's largest Jewish communities.

According to research carried out by the geneticist, Dr Eran Elhaik of the University of Sheffield, over 90 per cent of Ashkenazic ancestors come from that converted partially Greek-originating ancient community in north-east Turkey.

Dr Elhaik, an Israeli-born geneticist who gained his doctorate in molecular evolution from the University of Houston, believes that three still-surviving Turkish villages - Iskenaz, Eskenaz and Ashanaz - on the western part of an ancient Silk Road route were part of the original Ashkenazic homeland. He believes that the word Ashkenaz originally comes from Ashguza - the ancient Assyrian and Babylonian name for the Iron Age Eurasian steppeland people, the Scythians.

Referring to the names of the three Turkish villages, Dr Elhaik points out that "north-east Turkey is the only place in the world where these place-names exist".

From the 690s AD onwards, anti-Jewish persecution by the Christian Byzantine Empire seems to have played a part in forcing large numbers of Jews to flee across the Black Sea to a more friendly state - the Turkic-ruled Khazar Empire with its large Slav and other populations.

Some analyses of Yiddish suggests that it was originally a Slavic language, and Dr Elhaik and others believe that it was developed, probably in the 8th and 9th centuries AD, by Jewish merchants trading along some of the more northerly Silk Roads linking China and Europe.

By the 730s, the Khazar Empire had begun to convert to Judaism - and more people converted to the faith.

But when the Khazar Empire declined in or around the 11th century, some of the Jewish population almost certainly migrated west into Central Europe. There, as Yiddish-speaking Jewish merchants came into contact with central European, often German-speaking, peoples, they began to replace the Slav words in Yiddish with large numbers of German and German-derived words, while retaining some of its Slav-originating grammar. Many Hebrew words also appear to have been added by that stage.

The genetic modelling used in the research was based on DNA data from 367 Jews of northern and eastern European origin and more than 600 non-Jewish people mainly from Europe and western Asia.

Dr Elhaik says it is the largest genomic study ever carried out on Ashkenazic Jews. His research will be published in the UK-based scientific journal, Genome Biology and Evolution.

Further research is planned to try to measure the precise size of the Semitic genetic input into Jewish and non-Jewish genomes.

Comment: Remember this the next time your hear Netanyahu, or any other radical Zionist, say that the Jewish people are justified in stealing and occupying Palestinian land because their 'people' ruled it for thousands of years. It's plainly and simply nonsense. And even if the logic were justified (it isn't), the vast majority of Jews should go to Turkey, not "Israel".