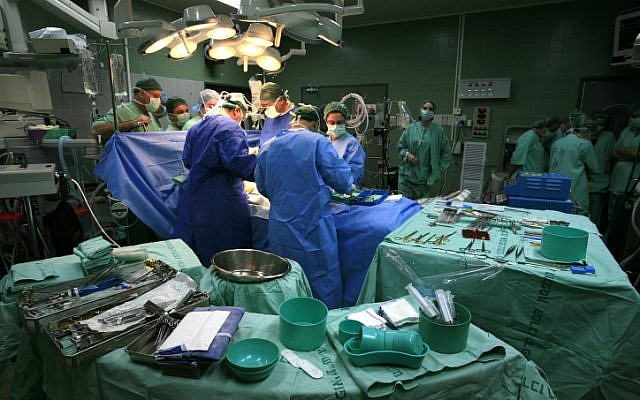 Illustrative photo of an operating room. (Nati Shohat/Flash90)
PRISTINA, Kosovo — The Israeli ringleader of a global gang of organ traffickers has been arrested in Cyprus, Kosovan police said on Saturday.
Moshe Harel is suspected of organizing dozens of illegal kidney transplants at the Medicus clinic in the capital Pristina in 2008, and is the man being held, according to local media.
“The suspect whose initials are MH was arrested a few days ago in Cyprus following an international arrest warrant” from Pristina, Kosovan police spokesman Baki Kelani told AFP.
Harel has been hunted by the authorities for almost a decade for exploiting victims, often recruited from poor areas in Eastern Europe and Central Asia, by promising 15,000 euros ($18,000) for their organs.


Recipients would pay up to 100,000 euros for the transplant.
The organ trafficking network came to light in 2008 after a Turkish man collapsed at Pristina airport after having a kidney removed.
Police raided the Medicus clinic, which shut following the scandal.
In 2013, an EU-led court in Kosovo sentenced five Kosovan doctors to up to eight years in prison for organ trafficking in the country.
Donors, whose organs were illegally removed, were left without proper medical care and treated “like waste,” prosecutors said at the time of the trial.
The Supreme Court of Kosovo annulled the verdict in 2016 and ordered a new trial, which is ongoing.
The indictment named Harel as the trafficking network’s mastermind, while Turkish doctor Yusuf Ercin Sonmez — labelled by Kosovo media as the “Turkish Frankenstein” and still on the run — was suspected of performing the transplants at the clinic.
Source: https://www.timesofisrael.com/israeli-organ-smuggling-mastermind-arrested-in-cyprus/
Posted by Joseph Pede Poetry at 6:51 PM