Why are the deaths of these two individuals a valuable lesson for the idiotic public?


The Boston Bomber was not named Tsarnaev, nor did he have anything to do with the bombing - other than to be a patsy for a corrupt shadow-government cabal. The real Boston Bombers are Barack Obama, the myriad of U.S. government agencies and the news networks who have conspired to overthrow the American Republic. There may also be a Canadian connection as revealed by David Hawkins – namely CTV and Signal Systems a division of the Vancouver, B.C. McLean Group.


The irony in the death of these two individuals is that the degree of security in one case was beyond comprehension, and non-existent in the other. There is absolutely no evidence that would convict the Tsarnaev brothers, other than video clips showing they were carrying a knapsack.  The latest news video to be released reveals that they were unarmed, implored the police to stop shooting and yelled they had nothing to do with the bombing.


The U.S. government killed an innocent young man to protect a murderous and duplicitous President and his controllers. Alternative news media has posted an immense amount of evidence proving that the Boston Bombing was staged. Video footage, surveillance cameras and photographs have in fact convicted the U.S. government and media.


In the death of Moskowitz there is no evidence and this man’s blunt trauma to head was the result of a fall. This is the official story. Case closed! This man was killed in the New York subway.


Has it not crossed anyone’s mind that the New York subway system has more security cameras than the White House? We should know exactly how and who killed Moskowitz. The only logical conclusion is that his murder was sanctioned.


So much for security!

Posted by Joseph Pede Poetry at 11:53 PM No comments:

Was "Jews for Jesus" Leader Murdered? 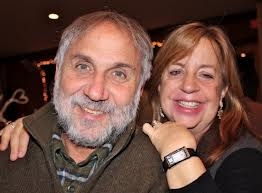 (l. Jhan Moskowitz and his wife Melissa)
Jhan Moskowitz, 64, was struck over the head on a lonely subway platform
in NYC September 5, 2012. The cops swept it under the carpet as a "fall."

Moskowitz co-founded "Jews for Jesus" which converts
Jews to Christianity. Who would want this man dead?
Makow comment: There is no Wikipedia entry for Jhan Moskowitz. This speaks volumes about his "offense" and Wikipedia.


Jhan Moskowitz, co-founder of "Jews for Jesus" really 'got' Christianity. When he describes his own repentance experience, he proves it. His experience blended with mine.
"When I went to Israel I was an atheist," said Moskowitz, "but by the time I left, I knew that God did exist. I became a seeker. I felt God had created the universe with a purpose, and I wanted to know his purpose for my life. I found my answer in 1971 when I came to terms with God through the Messiah, Jesus.

"I realized that I wasn't a good person like I'd always thought I was, I was a weak person who had never let go of sins I relished. Then I realized I'd wasted my life... I realized that my life wasn't mine to do what I please with... I was deeply ashamed.

"I didn't ask for forgiveness at all, I simply said I was sorry. In that moment my love of sins dropped, and I felt the forgiving presence of God. I realized something really did happen with Jesus and it's still been going on ever since. The night I was filled with forgiveness, I met the Messiah of Israel".


No sooner than I had discovered this man, and found dozens of hours of his sermons, I learned he died violently Sept 5th, 2012, on a NYC subway platform.

The only 'witness' was an unidentified subway cop who said he found Moskowitz lying with blood gushing out of his skull. He was conscious.
The cop wrote the report that Moskowitz 'slipped and fell'.

He arrived at the hospital in coma with a nasty brain contusion from blunt trauma. Undisclosed family members allowed him to be taken off life support within 24 hrs. He was a robustly healthy man of 64 years old. He probably would have lived another active 20 years at least.

I read a post by one of his converts from 40 years ago. Moskowitz trained his people how to run in the subway if they were attacked. It's highly suspicious that he died of blunt trauma to the head due to slipping on the steps all by himself, with no credible witnesses.

In one of the videos, Moskowitz spoke frankly about the cost of being ruled a 'traitor' by the Orthodox enforcers. He said conversion is perceived as betrayal of the the group. "We've been trained and socialized as Jewish people to be loyal to our group. Our group is 'us' and everybody else is 'them'. 'Them' believe in Jesus, we don't. Therefore when you become a believer in Jesus you become a 'them'.

The real cost is giving up that association, and being considered a traitor. And that's an expensive cost, especially considering that loyalty really is a virtue. However, loyalty ceases to be a virtue when it's employed in the service of a lie.

He said from the convert's point of view, "It's the most Jewish thing in the world to believe in the Jewish Messiah."

In his case, I only wondered why they let him live so long. Maybe it's because he was finally getting mainstream fame through Youtube. I'll bet his name recognition was in an exponential upturn.

I think if he'd been content to associate with other converts instead of confronting Orthodox rabbis on radio talk shows, he wouldn't have had that 'accident'.

His recent nemesis was Tovia Singer, founder of 'Outreach Judaism', an organization specifically to 'deprogram' Jews for Jesus converts. A radio debate between them from 2009 is linked here. At one point they yell over each other.

Rabbi Singer was involved in a sleazy sex scandal a year later in 2010.

See more at: http://henrymakow.com/2013/04/Jews-for-Jesus-Leader-Jhan-Moskowitz.html#sthash.qqKE0gwB.dpuf
Posted by Joseph Pede Poetry at 9:49 PM No comments:


The average IQ in the United States is usually set at 100. Groups within the US score different average IQ's, such as 115 for college grads or 85 for African-Americans. Similarly, average IQ varies from country to country, shown in the 2002 book IQ and the Wealth of Nations (sets Britain at 100):
From Intelligence and the Wealth and Poverty of Nations by Richard Lynn

It's no wonder the government and corporate elite are getting away with untold crimes - we are becoming more stupid!

Posted by Joseph Pede Poetry at 6:48 PM No comments: