Major increase of HIV in the Philippines - ARTICLE ATTACHED

The human immunodeficiency virus (HIV), which causes AIDS, varies in prevalence from nation to nation. Listed here are the prevalence rates among adults in various countries, based on data from various sources, largely the CIA World Factbook. As of 2015, it is estimated that there are 36.7 million people worldwide infected with HIV.
The HIV pandemic is most severe in South Africa. Over 10% of all people living with HIV/AIDS reside within the region. Adult HIV prevalence exceeds 20% in Swaziland, Botswana, and Lesotho, while an additional six countries report adult HIV prevalence of at least 10%. Outside Africa, the highest prevalence rate is found in the Bahamas (3.3%).
In absolute numbers, South Africa (7.1 million), followed by Nigeria (3.2 million), and India (2.1 million) had the highest HIV/AIDS number of cases by the end of 2016. While South Africa's large population of HIV-positive people is attributable to its high disease prevalence (18.9%, one of the highest in the world), Nigeria's is lower at 2.9%, and India's prevalence at 0.3% is comparable to Canada and the UK, and is lower than the United States.
On the other end of the spectrum, Svalbard is reported as having no cases of HIV/AIDS, while Bhutan has a much larger population but still only an estimated 246 cases through 2011.
HIV/AIDS prevalence estimates table.
This data was sourced from the CIA's world factbook unless referenced otherwise. A horizontal dash - indicates the data was not published. Adult prevalence describes ages between 15-49. 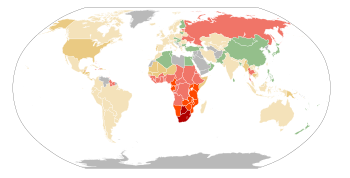