Senior Israeli rabbi calls for execution of all Palestinians

'Leave no one alive': Senior Israeli rabbi calls for execution of all Palestinians 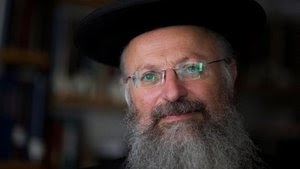 A senior Israeli rabbi says Tel Aviv should execute Palestinians instead of arresting them and "leave no one alive" in order to establish safety in the occupied Palestinian territories, Palestinian media report.

"Israeli army has to stop arresting Palestinians," Shmuel Eliyahu said in a message posted on his Facebook page on Tuesday, adding, "but, it must execute them and leave no one alive," Palestine News Network reported.

As chief rabbi of the city of Safed, Eliyahu is known for his racist behavior and remarks about Arabs and Muslims. He had earlier urged the Israeli regime to take "revenge" against Arabs in order to restore what he called Israel's deterrence.

In 2012, he was charged for making racist statements as he called the Arab culture "cruel" and accused Arabs of having "violent norms" which "have turned into ideology." Eliyahu alleged that Arabs steal farm equipment belonging to Jews and blackmail farmers.

"The minute you make room for Arabs among Jews, it takes five minutes before they start to do whatever they want," he purportedly said.

However, the Israeli Justice Ministry dropped the charges against him, claiming that reporters 'may' have changed his statements.

Back in December, the Jerusalem Post quoted Eliyahu as saying, "Should we leave them (Palestinians) alive in order to then free them in another gesture to Palestinian Authority President Mahmoud Abbas? The fact that they still have a desire to commit ... attacks shows that we are not operating strongly enough."

On his Facebook page, he also called for the prosecution of those Israeli forces that keep Palestinians alive, saying, "We must not allow a Palestinian to survive after he was arrested. If you leave him alive, there is a fear that he will be released and kill other people... We must eradicate this evil from within our midst."

The comments come as tensions have been running high across the occupied Palestinian lands in recent months over Tel Aviv's imposition of restrictions on Palestinian worshipers' entry into the al-Aqsa Mosque compound in East al-Quds (Jerusalem) in August last year.

More than 160 Palestinians, including women and children, have been killed by Israeli forces since the beginning of last October.