A new book called The Jewish Slave, written by an orthodox rabbi in the Netherlands, has once again highlighted the role played by Jewish extremists in the African slave trade. 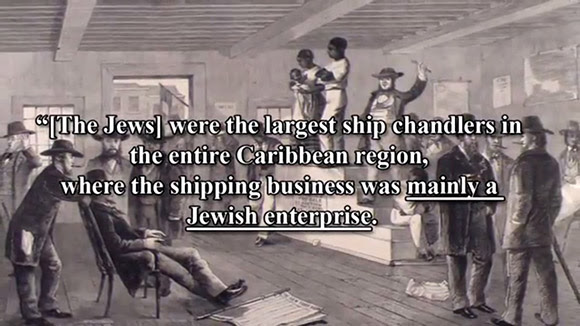 According to a report in the Jewish Telegraphic Agency (JTA) and the Jewish Journal, the book will “remind[ing] Dutch Jews of their ancestors’ deep involvement in the slave trade.”

Written by Rabbi Lody van de Kamp, the book was sparked off by the ongoing controversy over an old Dutch Christmas tradition known as “Zwarte Piet” (Black Pete)—a mischievous character who accompanies the Dutch version of Father Christmas around Holland as his assistant.

Even though Zwarte Piet is actually supposed to be an elfish character whose black face is the result of his working in a coal mine, black activists in the Netherlands have claimed that it is in reality a racial parody of black people (which it is not).

Nonetheless, Rabbi Van de Kamp has joined the chorus calling for the abolition of Zwarte Piet, and at the same time, revealed that the Dutch Jewish community also has a Zwarte Piet tradition of its own, called “Hanukklaas.”

The article in the Jewish Journal is titled “How culpable were Dutch Jews in the slave trade?” and says that Rabbi Van de Kamp criticized the Zwarte Piet tradition on Republiek Allochtonie, a black news-and-opinion website based in the Netherlands.

On that site, Rabbi Van der Kamp wrote that the “portrayal of ‘Peter the slave’ dates back to a period when we as citizens did not meet the social criteria that bind us today.

“Speaking out against Black Pete is part of my social mission, an effort that extends to reminding Dutch Jews of their ancestors’ deep involvement in the slave trade,” the article continued.

Referring to his new book on the Jewish role in the African slave trade, Rabbi van der Kamp said that “Money was earned by Jewish communities in South America, partly through slavery, and went to Holland, where Jewish bankers handled it.”

In researching the book, Rabbi Van de Kamp said he discovered data that shocked him.

“In one area of what used to be Dutch Guyana, 40 Jewish-owned plantations were home to a total population of at least 5,000 slaves,” he says.

“Known as the Jodensavanne, or Jewish Savannah, the area had a Jewish community of several hundred before its destruction in a slave uprising in 1832. Nearly all of them immigrated to Holland, bringing their accumulated wealth with them.

“Some of that wealth was on display last year in the cellar of Amsterdam’s Portuguese Synagogue, part of an exhibition celebrating the riches of the synagogue’s immigrant founders.”

Rabbi Van de Kamp says the exhibition sparked his interest in the Dutch Jewish role in slavery, which, he says, was “robust.”

According to research, on the Caribbean island of Curacao, Dutch Jews may have accounted for the resale of at least 15,000 slaves landed by Dutch transatlantic traders, according to Seymour Drescher, a historian at the University of Pittsburgh.

Jews were so influential in those colonies that slave auctions scheduled to take place on Jewish holidays often were postponed, according to Marc Lee Raphael, a professor of Judaic studies at the College of William & Mary.

Dr David Duke has dealt with the issue of Jewish involvement in the Trans-Atlantic slave trade in two remarkable videos, which are “must-see” material and can be viewed below: