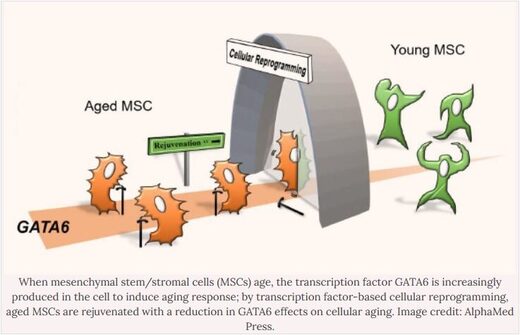 Cellular reprogramming can reverse the aging that leads to a decline in the activities and functions of MSC cells. This is something that researchers have known for a while.

But what they had not figured out is which molecular mechanisms are responsible for this reversal.

A new study, led by University of Wisconsin-Madison's Dr. Wan-Ju Li, not only enhanced the knowledge of MSC aging and associated diseases, but also provided insight into developing pharmacological strategies to reduce or reverse the aging process.

"While agreeing with previous findings in MSC rejuvenation by cellular reprogramming, our study goes further to provide insight into how reprogrammed MSCs are regulated molecularly to ameliorate the cellular hallmarks of aging," Dr. Li said.

They then reverted these iPSCs back to MSCs, in effect rejuvenating the MSCs.

The scientists next conducted an analysis of the cells to determine if there were any changes in global gene expression resulting from the reprogramming.

They found that the expression of the GATA6 protein, which plays an important role in gut, lung and heart development, was repressed in the reprogrammed cells compared to the control cells.

This repression led to an increase in the activity of a protein essential to embryonic development called sonic hedgehog (SHH) as well as the expression level of yet another protein, FOXP1, necessary for proper development of the brain, heart and lung.

"Thus, we identified the GATA6/SHH/FOXP1 pathway as a key mechanism that regulates MSC aging and rejuvenation," Dr. Li said.

To determine which of the Yamanaka transcription factors (four reprogramming genes used to derive iPSCs) were involved in repressing GATA6 in the iPSCs, the team analyzed GATA6 expression in response to the knockdown of each factor.

This yielded the information that only OCT4 and KLF4 are able to regulate GATA6 activity, a finding consistent with that of several previous studies.

"Overall, we were able to demonstrate that SF-MSCs undergo substantial changes in properties and functions as a result of cellular reprogramming," Dr. Li said.

"These changes in iPSC-MSCs collectively indicate amelioration of cell aging."

"Most significantly, we were able to identify the GATA6/SHH/FOXP1 signaling pathway as an underlying mechanism that controls cell aging-related activities."

"We believe our findings will help improve the understanding of MSC aging and its significance in regenerative medicine."

The findings were published in the journal Stem Cells.