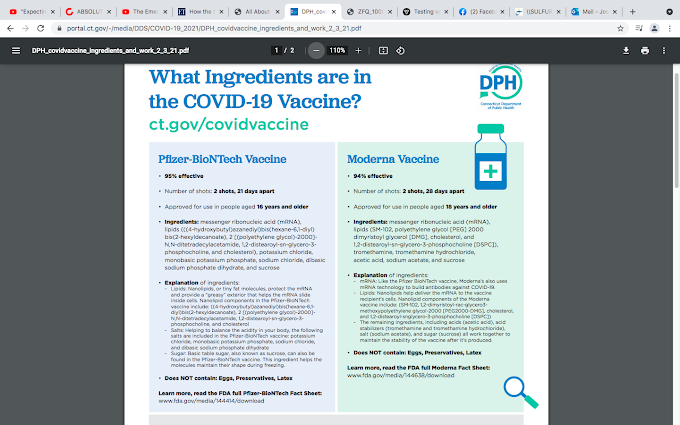 Source: https://portal.ct.gov/-/media/DDS/COVID-19_2021/DPH_covidvaccine_ingredients_and_work_2_3_21.pdf
I don't know how many of you belong to a Masonic order or to the Church of Satan - perhaps many of you have sworn allegiance to Satan. Your inaction in allowing Trudeau, Ford, Tory, Tam, Williams and DeVilla to poison and permanently damage Canadians leaves little to be desired. One thing is certain, your after-life and that of the ones YOU love, will pay a hefty price for your transgressions. It may be over for the many Canadians you have poisoned, but the terror is just beginning for you and your families. You are DOOMED.
You have allowed a fictitious virus, which has yet to be isolated, to give credence to these poisonous serums, filled with chemical toxins and mind and body altering technology.
We know the AstraZeneca serum produces blood clots, yet no warning of the dangers, to those who were Factor-5 Leiden positive, was provided.
The Moderna and Pfizer vaccines are filled with poisons. The ingredient lists for both is shown, and the material safety data sheets for each of one of the poisons in each serum is attached.
The safety data sheet for SM-102 in Moderna
https://static.weg.net/medias/documents/hfa/h99/ZFQ_10005234335_en.pdf
The safety data sheet for 4-hydroxybuty in Pfizer
https://www.caymanchem.com/msdss/26857m.pdf
Why are the non-Masonic military and police factions not arresting these FUCKING grotesque criminals who continue to coerce Canadians into be poisoned, so they can remain as gods on Earth? The fact that they are using their political powers to achieve this end is sedition in the worst degree. It's an "INSIDE JOB".
Trudeau, Ford, Tory, Tam, Williams and DeVilla should be arrested, charged and executed by our military. They are despicable demonic trash. I'm not even sure they are human.
With the recent spate of violence among Black Gangs I would offer them some advice - rather than waste bullets on each other, do Canadians a big favour and point them at OUR City Halls. Provincial Legislatures and the Canadian Parliament. They house the evillest of drug dealers.
Thank you,
Joseph Pede
Finally, I don't believe this many people are being tested daily. Statistical FRAUD.
https://covid-19.ontario.ca/data/testing-volumes-and-results

Posted by Joseph Pede Poetry at 11:38 AM